Many commercial leases contain a continuous operations clause. An example of such a provision is as follows:

Tenant agrees to continuously and diligently operate its business during the lease term during the hours and days that are normal and customary for businesses of the same nature as that of the tenant. 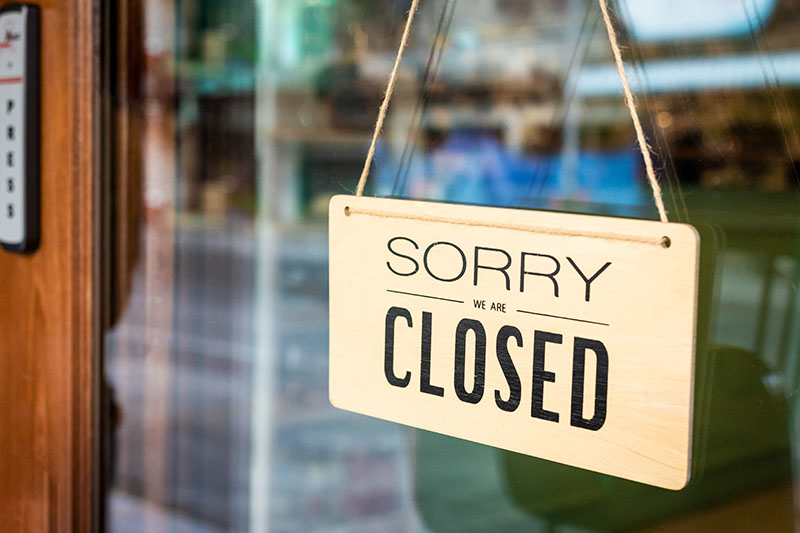 Under normal circumstances, such provisions are legally valid and enforceable, and the failure of a tenant to abide by a continuous operations clause constitutes a default that can lead to the immediate termination of the lease, along with a panoply of remedies associated with the breach (including pursuing individual lease guarantors).

In circumstances where the closure of a business is government-mandated, a tenant likely would be excused from the consequences of breaching such a clause. This can happen in one of three ways:

1. Contract provision excusing performance: The lease may have a provision that excuses performance by the tenant (or by either party) if the failure of performance arises from a list of circumstances, such as act of God, civil unrest, labor disruption (not caused by the tenant), law or governmental order. Depending on the wording of the provision and the individual circumstances of the tenant’s business, a tenant demonstrating that a government order required it to close to the public likely has a strong case for avoiding liability for breach.

2. Impossibility: A tenant that closes leased premises also may be able to avoid liability under Missouri common law. Missouri law recognizes two similar but different common law defenses that excuse a contracting party’s performance in circumstances of extreme hardship. The doctrines are impossibility and frustration of purpose.

According to the Missouri Supreme Court, “If a party, by contract, is obligated to a performance that is possible to be performed, the party must make good unless performance is rendered impossible by an Act of God, the law, or the other party.” A business that closed because of a governmental order or decree that required closure may succeed in proving that performance was excused based on impossibility.

However, each business and each applicable order would have to be reviewed on a case-by-case basis. In addition, to take advantage of the impossibility defense, the tenant under a commercial lease would have to demonstrate that it took virtually every action within its powers to perform its duties under the contract.

So, a tenant might fail in arguing that staying open was impossible but might win on commercial frustration.

A landlord seeking to invoke a continuous operations clause should carefully analyze the factual circumstances of a specific lease to determine the cause of the business shut down. There will not necessarily be a one-size-fits-all approach. There is a material difference between a business closing its doors temporarily because it expects an economic downturn in the demand for its product and a business that closes because it either has been specifically ordered closed or de facto ordered closed.

Also, the length of the closure could be a factor. Assuming that one or more governmental orders shut down the business, when the order is no longer in effect, how long may a business remain closed before being at risk of violating the continuous operations clause? There likely will need to be a test developed by courts on a case-by-case basis under the facts applicable to individual circumstances.

Obligation to pay rent/right of tenant to terminate

As just discussed with regard to continuous operations provisions, landlords should expect that tenants that close their businesses likely will argue that they do not have to pay rent during the closure under the doctrines of impossibility and commercial frustration.

The strength of such an argument will depend on the factual circumstances. For example, a leased location that cannot be used at all likely will not be generating any revenue for the tenant. If the tenant argues that the lack of revenue – through circumstances beyond the tenant’s control – have made it impossible for the tenant to pay the rent, a court may excuse the non-payment. But, there are myriad factors to consider before a tenant stops paying.

One question may be whether the tenant must or the landlord can terminate the lease. If a tenant is hopeful that it will reopen within a few weeks, it might prefer to avoid rent payments while closed but have the lease to go back to when it is time to reopen. Can that be done? Landlords should expect that tenants who allege impossibility or commercial frustration will not terminate the lease but rather may specifically emphasize that since the breach for non-payment is excused, the tenant has not terminated and the landlord cannot do so either.

As discussed below with regard to eviction, a landlord that takes action (such as purporting to terminate a lease) based on the non-payment of rent could face consequences that lead to the landlord owing damages to the tenant, if a court later excuses the tenant’s breach.

Abandonment: When a tenant truly abandons leased premises (meaning leaves the leased premises for good with no intent to return), a landlord has common law rights with regard to securing, protecting and reentering the premises. When there is a dispute about abandonment, a landlord can face damages claims by a tenant that has merely discontinued active use of leased space. This is particularly confusing now, as tenants that shut down and remove valuable contents from a leased space may appear to have abandoned, but they may have every intent to return when circumstances change.

If there is confusion, the landlord should seek clarity before unilaterally concluding that a tenant has abandoned. If the landlord has a reasonable belief that the tenant has vacated the premises with no intention of returning and if the rent has been past due for 30 days or more, the landlord may mail and post notice of abandonment. If the notice period expires without the tenant paying the rent or sending the landlord written notice of the tenant’s intention not to abandon, the landlord can take certain actions outlined in the statute, such as confiscating property in the leased space.

Landlords should be aware of the right to declare premises abandoned, and tenants should be on the lookout for statutory notifications from landlords. The tenant may not be getting its mail or visiting the leased premises at all, and a tenant can lose the right to its property in as few as 10 days.

Even if the tenant’s business remains open, if a tenant fails to pay rent, a landlord may want to evict the tenant (in addition to suing for past due rent). Do governmental enactments and declarations pose barriers to eviction? Probably.

Eviction: Self-help eviction is prohibited in Missouri. That means that if a tenant stops paying rent, a landlord cannot simply enter the leased space and use force to physically evict the tenant.

Similarly, a landlord is not permitted to lock a tenant out of a leased space. Landlords who take such action in response to a failure to pay rent can be liable for converting the tenant’s property within the leased space. It is not a defense to such a claim to assert that the tenant’s access was conditioned upon rent paying and, because rent was not paid, the tenant forfeited a right of access. If the tenant is successful in proving the landlord locked the tenant out, the tenant could recover punitive damages. And, such a claim might not be covered by insurance.

The only authorized method of physically evicting a tenant in Missouri is through judicial process. The two most expedited paths to obtaining a judicial order allowing for eviction are petitions filed under Missouri statutory enactments relating to rent and possession or unlawful detainer. Each of these statutory sections provides a route for a landlord to get into court quickly, prove a right to evict with only limited evidence and secure an order that provides a basis to evict.

However, there are three problems facing a landlord who seeks to evict a tenant during a time when businesses are entirely shut down or suffering from the consequences of government-mandated restrictions on operations. The first is the most pragmatic. The courts where such suits must be filed and presented to a judge may be closed. Most courts have posted updates identifying which suits and proceedings are being handled at a given time. A landlord may be able to file a suit to evict, but if the courthouse is not issuing summons for service of such claims and/or if the judges are not scheduling such cases for hearing, the landlord may not be able to obtain a judgment.

Second, if a landlord is able to obtain a judgment, law enforcement may be postponing participation in eviction proceedings based on health-related concerns. Without law enforcement, even a landlord with a judgment allowing for eviction would be stymied in an attempt to physically evict.

Third, judges deciding eviction cases may be unwilling to enter eviction orders, even if the landlord can prove that the tenant did not pay rent. As discussed above with regard to continuous operation clauses, in light of public health concerns, governmental orders, force majeure, impossibility or commercial frustration, tenants may have new and/or novel defenses that excuse the failure to pay rent and thwart eviction actions. Again, each case may be fact-specific, but a landlord should not assume that simply alleging and proving a failure to pay rent will result in a judgment of eviction.

As facts, law and circumstances change, what was standard practice in commercial real estate settings may be inapplicable or radically different. The best strategy likely involves revisiting prior practice and conferring with counsel before declaring breaches, responding to breach assertions, terminating leases, abandoning premises, changing locks or evicting tenants.

Greg Mollett is a Greensfelder officer whose practice focuses on real estate, environmental and commercial litigation.