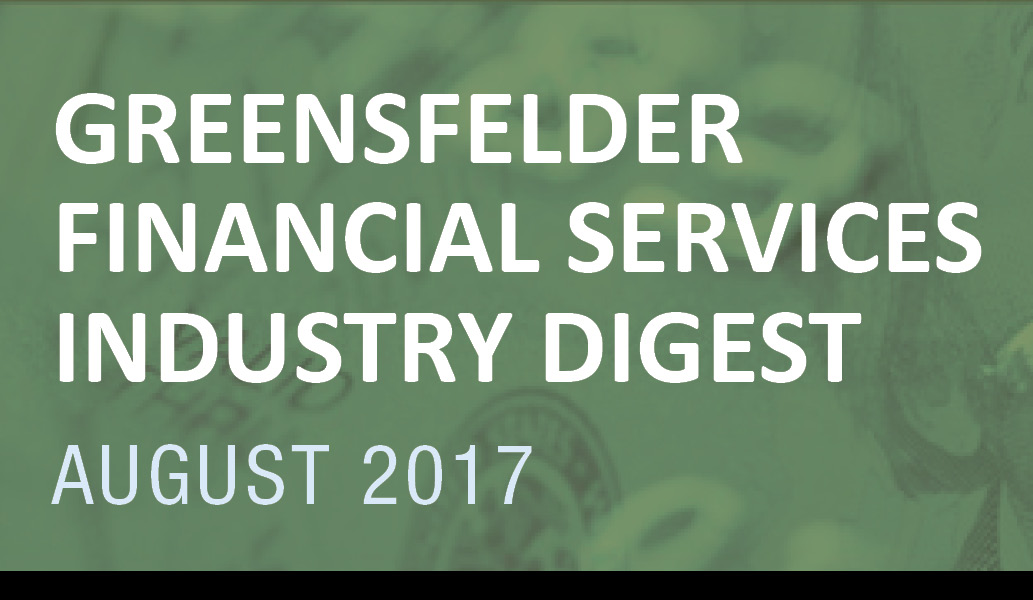 Clayton’s Priorities: SEC Chairman Jay Clayton announced the eight principles that will inform his chairmanship in remarks July 12 at the Economic Club of New York. Perhaps the new chairman’s most colorful moment was his statement that the interests of retail investors are the lodestar of the SEC, noting that as he walks around the agency, he asks how SEC actions “affect the long-term interest of Mr. and Ms. 401(k).” Read our full summary here.

Fiduciary Updates: There were a variety of relatively minor updates related to fiduciary duty obligations in July but no new finality on the various fronts:

FINRA High-Risk Broker Focus: The FINRA Board of Governors authorized FINRA to publish a regulatory notice soliciting comment on two proposals aimed at making it harder for bad actors to operate as financial advisers. The first proposal would require members to consult with FINRA or file a continuing membership application if a broker “with certain specified risks” is to be added to the firm or seeks to become an owner or principal. The second proposal would provide FINRA staff with rule-based authority to presumptively deny a new membership application if the applicant or its associated persons are subject to pending arbitration claims.

The Board’s action was foreshadowed in a speech we mentioned last month that FINRA CEO Robert Cook gave at Georgetown University.

Peirce Nominated for SEC: President Trump sent to the Senate his nomination of Hester Peirce for one of the vacant SEC Commissioner roles. Peirce, the senior research fellow and director of the Financial Markets Working Group at the Mercatus Center at George Mason University, was nominated by President Obama as a package with a Democrat, but the Senate never voted on their confirmation. No corresponding announcement about a Democratic nominee has been made, although the president is said to be eyeing Columbia University law professor Robert Jackson.

New FINRA Enforcement Chief: Susan Schroeder, who had been the acting director of enforcement, was named FINRA’s executive vice president and head of enforcement. FINRA also plans to consolidate its enforcement functions into a new unified enforcement group, which Schroeder will lead.

SEC Rulemaking: The new Unified Agenda of Federal Regulatory and Deregulatory Actions filed by the SEC no longer includes 35 rulemaking proposals that appeared on the list of pending regulations last fall. Among those dropped were potential rules on Pay Versus Performance that would have required issuers to disclose the relationship between executive compensation and the company’s financial performance, Listing Standards for Recovery of Erroneously Awarded Compensation regarding the clawback of executive compensation after an earnings restatement, and Corporate Board Diversity.

SEC Speeches: In addition to Clayton laying out the eight principles that will underpin his chairmanship, Commissioner Kara Stein gave a speech in which she argued that increased transparency is needed for the capital markets to function properly given the rise of dark pools, opacity in order routing and execution, and the enormous growth in capital raised in private markets. Clayton’s 8 principles speech and Stein’s speech suggest they have different views on the drop in the number of IPOs over the past two decades. Read our analysis here.

Clayton also gave opening remarks July 27 at the National Compliance Outreach Program for Broker-Dealers at which he emphasized regulatory coordination.

Exam Update: The SEC on July 7 approved a FINRA rule change regarding securities licensing and exams. The update restructures FINRA’s qualification exams and creates general knowledge and specialized knowledge exams, among other changes.

Client account access: The North American Securities Administrators Association (NASAA) is requesting comment on a proposal to amend its model rule on unethical business practices by adding to the list of specified, unethical actions the practice of investment advisers and investment adviser representatives accessing accounts with the client’s own usernames and passwords rather than through a separate log-in created for the adviser. The amendment would not affect brokers or their registered representatives. Comments are due Aug. 25.

FINRA Guidance: FINRA released an FAQ to help securities firms implement amendments to Rule 2232. The amendments, approved by the SEC last November and slated to go into effect May 14, 2018, require firms to disclose additional pricing information on retail customer confirmations in corporate and agency bonds.

Whistleblower Awards: The SEC announced $4.2 million in recent whistleblower awards: an award of nearly $2.5 million to an employee of a domestic government agency whose tip helped launch the SEC investigation and continued to cooperate with the SEC, as well as an award of $1.7 million to an insider whose tip helped stop a fraud “that would have otherwise been difficult to detect.” Read the press releases here and here.

Digital tokens as securities: The SEC issued an investigative report that found that The DAO’s sale of DAO Tokens constituted the sale of securities subject to the federal securities laws. The DAO is a virtual organization embodied in computer code and executed on a distributed ledger or blockchain. The DAO was created to sell DAO Tokens and planned to use the proceeds to fund projects. Holders of DAO Tokens expected to share in the earnings of these projects.
Press release | Statement by the Divisions of Corporation Finance and Enforcement

FINRA/SEC Appointments: FINRA appointed several new governors and re-appointed others at its July Board of Governors meeting. Amy L. Webber, president of Cambridge Investment Research, Inc., and Kathleen Murphy, president of Fidelity Personal Investing, were added to the board while Joshua S. Levine, Elisse B. Walter, Susan Wolburgh Jenah, and Joseph M. Mecane were appointed to second terms on the board.

The SEC also continued to fill vacancies on its staff as Bryan Wood was appointed director of the agency's Office of Legislative and Intergovernmental Affairs; Jessica B. Magee was appointed associate regional director for enforcement in the Fort Worth Regional office, and Christopher R. Hetner will continue to serve as senior advisor to Chairman Jay Clayton for cybersecurity policy.

Conflicts of Interest: The SEC settled with a dually registered investment adviser and broker-dealer that agreed to pay over $450,000 in disgorgement and prejudgment interest and a $100,000 civil penalty as a result of conflicts of interest. First, the company failed, in its capacity as an investment adviser, to disclose to its advisory clients compensation it received from a third-party broker-dealer for revenues the broker received for certain mutual fund investments, which created a financial incentive to favor those funds and thus created a conflict of interest. Second, after negotiating a new contract with its clearing broker, the firm saved $54,957 in clearance and execution costs, but did not pass any of the savings on to its advisory clients, nor did it conduct an adequate best execution analysis of whether its clients were still receiving best execution in light of the increase.

Market Access Rule: FINRA and several exchanges imposed fines totaling $4.75 million against four firms for violating the Rule 15c3-5 of the Securities Exchange Act of 1934 (known as the Market Access Rule). The four firms provided market access that allowed numerous clients to execute millions of trades per day, but failed to implement controls reasonably designed to prevent the entry of erroneous or duplicative orders; to prevent the entry of orders that exceeded credit or capital thresholds; or to detect and prevent potentially manipulative activity.

ReTIRE Initiative: The SEC filed an enforcement action in federal court against four former brokers and a company, Federal Employee Benefits Counselors, charging that they were fraudulently inducing federal employees to roll over roughly $40 million from the federal Thrift Savings Plan (TSP) into higher-fee variable annuity products. The complaint alleges that defendants misrepresented the fees and returns of the investment and fostered the false impression that they were approved by the federal government or that the product they offered was vetted by the TSP. The brokers collectively earned approximately $1.7 million in commissions on these sales. Press release | Order

Boiler Room Pump & Dump: The SEC also filed a complaint against 13 individuals who perpetrated a pump and dump scheme via cold calls. The more than 100 victims, many of whom were seniors, were allegedly harassed and threatened as part of the scheme, which netted the defendants more than $14 million. One sales representative allegedly told a victim who was complaining about losses, “I am tired of hearing from you. Do you have any rope at home? If so tie a knot and hang yourself or get a gun and blow your head off.” The U.S. Attorney’s office in Brooklyn also brought charges. Press release | Order | Indictment

“How sec detect unusual trade”: The SEC charged a research scientist with insider trading after he made $120,000 in trades in advance of corporate acquisitions based on information he learned from his wife, who was an attorney at a law firm working on the deals. The SEC flagged the trades as suspicious through data analysis even though, before he made the trades, the defendant searched for “how sec detect unusual trade.” Press release | Order