It is with great sadness that Greensfelder announces that its chief executive officer and president, Timothy R. Thornton, passed away Sunday, June 23, 2019, as the result of a bicycle accident. Thornton was 64 years old.

“This is a huge loss for the Greensfelder family,” Greensfelder Chief Operating Officer Heather Henry said. “Tim was an inspiring and widely admired leader and will be greatly missed. His passion for the firm and its people was contagious.” 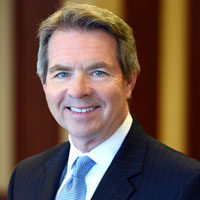 Thornton graduated from Washington University School of Law in 1980 and joined Greensfelder in 1981. He built a highly successful law practice focused on serving clients in the construction industry. He was well-respected among construction attorneys throughout the nation, as a fellow of the American College of Construction Lawyers and member of numerous other legal and trade organizations.

“It is very hard to lose such a great person, friend and colleague,” said Andy Manuel, leader of Greensfelder’s construction practice group. “Tim built lasting relationships on both a personal and professional level with our construction clients, experts, co-counsel, and opposing counsel that we will strive to continue.”

In 2016, Thornton became Greensfelder’s first CEO. Having served as a previous board member, firm president and highly respected partner during his 38 years with Greensfelder, Thornton was a natural fit for the newly established role. In his more than three years as CEO, Thornton’s vision for the firm led to progress in numerous areas, including the growth of its Chicago office, furtherance of the firm’s diversity initiatives and the implementation of a new strategic growth plan. In 2017, he was honored by Missouri Lawyers Media as a top Law Firm Leader during its annual Missouri Lawyers Awards.

Thornton’s vision for the firm was one where all employees were given the opportunity to achieve their highest potential, diversity of leadership was paramount to future success, and clients and community were at the forefront of Greensfelder’s business model. He believed that Greensfelder employees were the firm’s biggest asset and frequently referred to them as “family.” He was known as a great leader, and an even better person.

“His leadership has been invaluable in helping chart the future of Greensfelder,” said Vince Garozzo, past firm president and a member of the firm’s Board of Directors. “Having someone as well-respected as Tim leading the push was important in uniting the firm to achieve big goals.”

Outside of the office, Thornton was passionate about spending time with his family and cherished the time he spent with his wife, Terry; his children Patrick (Emily), Meaghan (Bryan), and Katie; and his granddaughter. He was an avid athlete and cyclist and had a love for U2 music.

Visitation has been scheduled from 3 to 7 p.m. Sunday, June 30, at Buchholz Mortuary West, 2211 Clarkson Road in Chesterfield, Missouri, and a funeral at 10 a.m. Monday, July 1, at Priory Saint Anselm at the Abbey, 530 S. Mason Road in St. Louis.

An obituary can be found here. In lieu of flowers, Thornton's family requests that donations be made in his name to Gateway Greening in St. Louis or to SSM Health Cardinal Glennon Children’s Hospital.